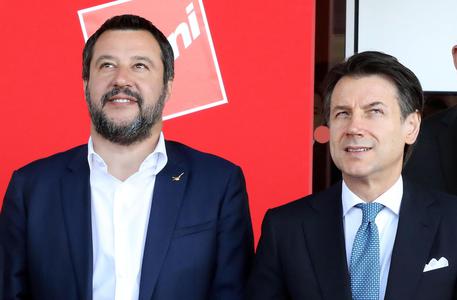 (ANSA) - Milan, May 17 - Deputy Premier and Interior Minister Matteo Salvini said on the Seawatch German NGO rescue ship and its 65 rescued migrants Friday "the premier (Giuseppe Conte) and the 5-Star (M5S) minister don't come into it, human traffickers won't get to Italy any more".
The attack on Conte opened a new front in the tensions between Salvini and his government partner, M5S leader Luigi Di Maio.
Salvini also said the choice of the next European Central Bank chief would depend on the result of the upcoming European elections.
Di Maio retorted that Italy has seen strongmen leaders in the past and felt no nostalgia for them.
"We've already had men alone at the commands and we certainly don't miss them," said Di Maio, who is deputy premier like Salvini.
Di Maio accused Salvini of wanting to "raise the level of clashes" amid rows about a graft probe that hit a League mayor and other issues.
The M5S leader also defended Premier Conte, whom Salvini had slammed over alleged lenience towards the migrant rescue NGO boats that the League leader has banned from Italy.
""There's not a lot to add about the attacks on the premier, who has all my support, and the government's," said Di Maio.
"I just say one thing, if everyone thinks one thing and there is only one contrary, perhaps that individual is wrong," he said, apparently referring to Salvini.