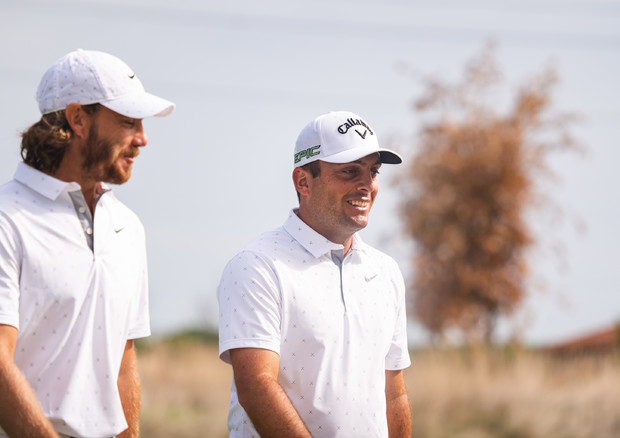 (ANSA) - ROME, SEP 3 - The Molinari brothers were three and six shots off the lead in the Italian Open at the halfway point but it was the elder and less famous sibling, Edoardo, who was better positioned compared to the 2018 Open winner Francesco.
'Edo' Molinari, 40, was seven under after a one-under round of 70 comprising an eagle, four birdies and five bogeys having been unable to replicate his first-round hole in one at the seventh.
'Chicco', 38, carded his second 69 to finish four under par.
Renato Paratore failed to make the cut after posting a five over total of 147 after a five-over round of 76.
England's Tommy Fleetwood is one ahead of Edoardo Molinari on eight under despite a double bogey after finishing in the water at the second last hole.
Leading on the course are Australia's Min Woo Lee on 10 under, ahead of four others alongside Fleetwood on eight under.
They include Finnish pair Mikko Korhonen, and Kalle Samooja, Sweden's Henrik Stenson, and American Johannes Veerman.
Francesco Molinari, is doubtful about a return to form at this week's 78th Italian Open after struggling this season with a back problem that prevented him from featuring in several major tournaments, apart from a 13th place finish in the US Open at the end of June.
But aiming for a win against big names like English pair Fleetwood and former world no.1 Luke Donald is Italy's other star, Guido Migliozzi, who is still basking in the afterglow of his fourth-place finish at Torrey Pines on June 20.
Migliozzi is currently even par for the tournament through eleven holes.
Another former world no 1, Germany's Martin Kaymer, will be gunning for success at the 2023 Ryder Cup venue just outside Rome, the Marco Simone Golf & Country Club at Guidonia Montecelio. (ANSA).