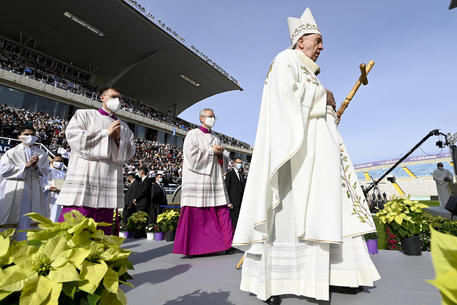 - ROME, DEC 3 - A total of 50 refugees will be transferred from Cyprus to Italy and all operations to transport and host them and help them integrate in Italy will be funded by the Holy See, at the initiative of Pope Francis.
Well-informed sources said that the first group of 12-15 people are scheduled to leave before Christmas while the others will follow between January and February 2022. From a juridical standpoint, the operation is called a "reallocation for humanitarian reasons".
The transfer of the 50 refugees to Italy and their integration will be organized by the Community of Sant'Egidio.
They are mainly migrants from Syria, Congo, Cameroon and Iraq, including families with children.
The announcement of the migrants' transfer to Italy was given during the pope's visit to Cyprus, which started Thursday morning.
On Friday morning the pontiff met Archbishop Chrysostomos II and the Holy Synod at the Orthodox Cathedral in Nicosia.
Francis celebrated mass for the Catholic community of Cyprus, in memory of St Francis Saverio, in front of about 10,000 people at the GSP Stadium in Nicosia.
In the afternoon, the pontiff went to the Church of the Holy Cross in Nicosia, close to the wall dividing the Greek-Cypriot part from the Turkish-Cypriot, for a moment of ecumenical prayer with migrants.
Some of those who will be transferred to Italy were among those present.
Upon his arrival, Francis was welcomed at the altar by the Latin patriarch of Jerusalem, Mons. Pierbattista Pizzaballa.