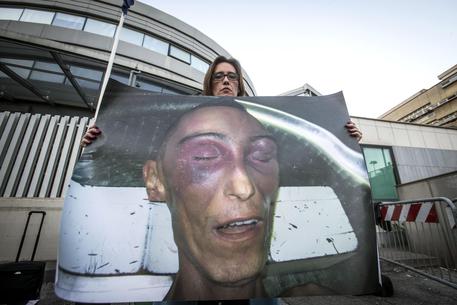 (ANSA) - Rome, October 11 - One of the Carabinieri police officers on trial in relation to the death in custody of Rome draughtsman Stefano Cucchi in October 2009 has accused two other cops accused of the beating that allegedly led to the fatality, a prosecutor told a court on Thursday. Cucchi, 31, died in a custodial hospital wing on the night between October 22 and 23, 2009, a week after he was picked up on minor drug charges.
Cucchi's body had many injuries that his family said were the result of brutality.
Thr prosecutor said Francesco Tedesco, one of three cops suspected of the beating, had given a statement in which he accused the other two, Alessio Di Bernardo and Raffaele D'Alessandro.
"I said 'no more, what the f**k are you doing," Tedesco said he told Di Bernardo and D'Alessandro during the beating in questioning with investigators on July 9.
"It was a combined act. Cucchi started to lose his balance due to a kick by D'Alessandro and then there was a violent push by Di Bernardo, which made him lose balance and caused a violent fall on his pelvis.
"Di Bernardo pushed but D'Alessandro struck with a kick in Cucchi's face while he was lying on the ground". The breakthrough comes after a long legal battle featuring several trials in which it frequently appeared that no one would be brought to justice for Cucchi's death. "Today there was a significant turning point for the trial and redemption for my client and the whole Carabinieri force," said Tedesco's lawyer, Eugenio Pini.
Cucchi's sister Ilaria, who has relentlessly campaigned for justice for her brother, said that "the wall has been knocked down.
"Now lots of people will have to apologize". Two other Carabinieri are also on trial - Roberto Mandolini for calumny and making false statements, and Vincenzo Nicolardi, for calumny. The director of a recent film on the case called Sulla Mia Pelle (On My Skin), Alessio Cremonini, told ANSA: "That damn door is opening, it's just a hearing and not a sentence, I hope they reach truth and justice".
"We always imagined that Stefano didn't fall down the stairs," said Cremonini, whose film stars Alessandro Borghi as Stefano and Jasmine Trinca as Ilaria Cucchi.